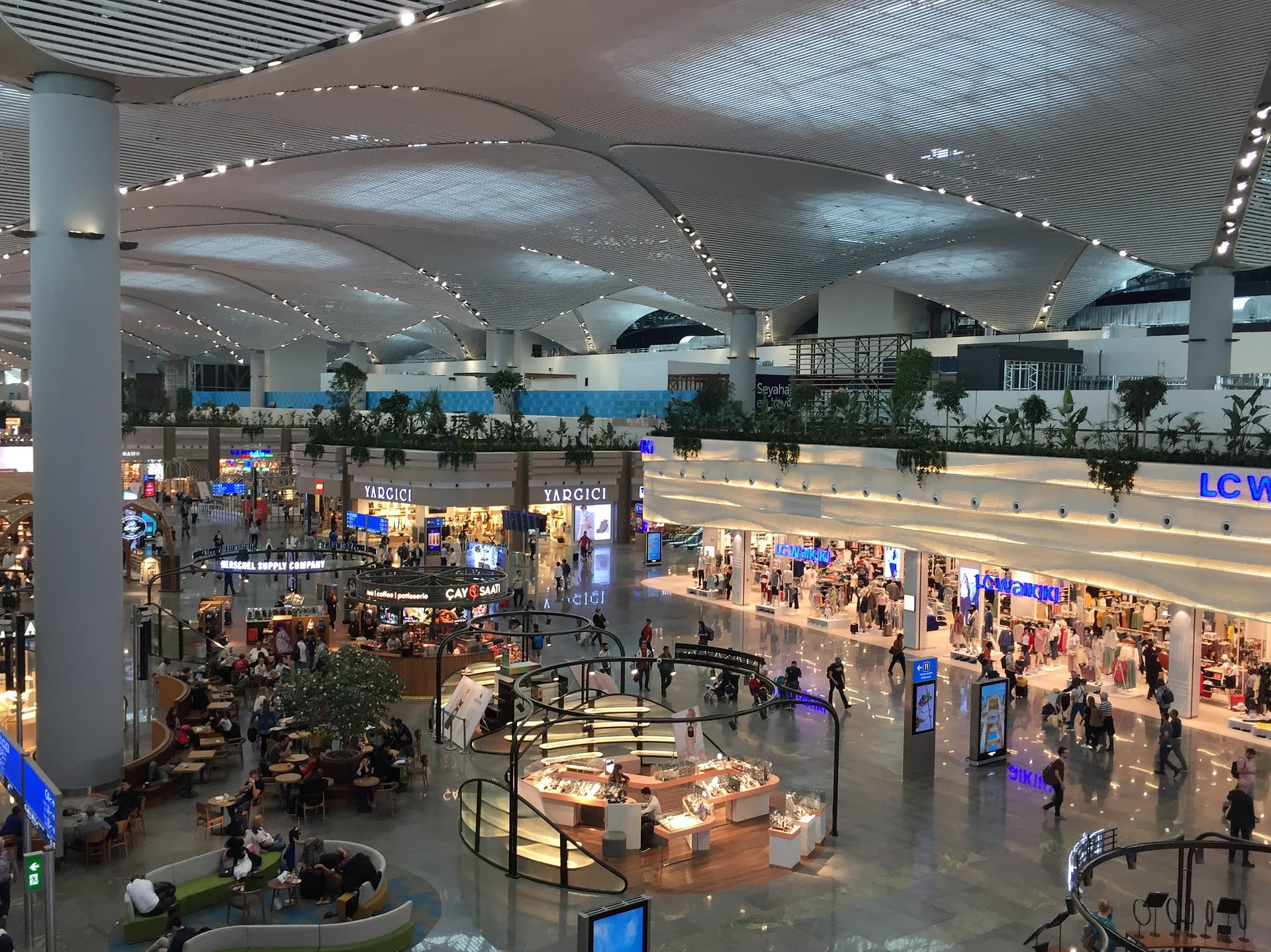 As I write this, Turkish society has reopened since the pandemic eased. Let´s hope that the situation will remain good and we will begin to enjoy traveling again. In this first part of my ´Ways to Commute´ -posts, I will tell you about Istanbul´s new airport (in part 2, I will tell you about the public transport in Istanbul). Despite its large size, the airport is a pleasant, easy, and friendly airport – and even visually charming. So let's land in Istanbul – a warm welcome!

´Istanbul Airport´ (İstanbul Havalimanı) is the main international airport serving Istanbul. It is located in the Arnavutköy district on the European side on the northwest of the city. The decision to build a new airport in exactly that area has been widely criticized as the winds of the nearby Black Sea and the location along the migratory bird route make the airport sometimes difficult to operate.

The distance from the airport to the center of Istanbul, Eminönü (Galata Bridge, Galata Köprüsü) is 39 km.

An annual passenger capacity of 90 million and an area of 1,440,000 m2 make Istanbul Airport the world’s largest airport terminal building under a single roof.

Construction started in May 2015. The design team was led by London-based Grimshaw and also included the Norway-based Nordic Office of Architecture and London studio Haptic. The inauguration of the airport took place on the planned date of 29 October 2018. As a special architectural detail, it should be mentioned that the traffic control tower is in the shape of the Turkish national flower, the tulip.

The airport currently has one terminal in service for domestic and international flights and four runways that are currently in operation. The airport features a total of five concourses lettered A, B, D, F, and G with a total of 143 passenger boarding gates. In addition to the standard airport services and facilities, there are, for example, a multi-faith prayer room and a mosque at Istanbul Airport. You will also be served by 291 shops.

3,500 security personnels and a total of 1,850 police, including 750 immigration officers, provide the airport’s security. In addition, the security of the airport is taken care of by, among other things, a ground radar and thousands of different types of security cameras. The operating terminal building alone houses up to 9,000 CCTV-cameras.

But that’s not all yet…

When completed, Istanbul Airport will be an important crossroads for Europe, Asia and the Middle East. Once all the phases of construction are completed by the mid-2020s, the airport will be able to accommodate 200 million passengers a year, and it will offer flights to more than 350 destinations. The airport will consist of four terminal buildings with interconnecting rail access and a total combined indoor area of 3,200,000 m2. In addition to typical airport operations, this building complex will include, among other things, a state palace, and indoor and outdoor parking that can accommodate up to 70,000 cars. A medical center, aircraft rescue and firefighting stations, hotels, convention centers, power plants, and wastewater treatment facilities will also be built.

The customer’s point of view

In my experience, Istanbul Airport is an easy and pleasant airport even though it is a large airport. The architecture and design have been successful. Thanks to its spider-shaped structure, the distances are not overwhelmingly long. Inside the airport, passengers are transported, if necessary, by electric minibuses, which are like multi-seater convertibles. The guidance and services are excellent too.

The rail connections to the airport are still being constructed, but the bus services (in addition to taxis) work surprisingly well. When you arrive at the arrival hall from your flight, you can easily reach the bus stops with the lifts found outside. The bus stops are located downstairs (taxi ranks are on  the same level as the arrival hall) and they are well signposted. The bus routes also serve many destinations in Istanbul. You can download your travel card (İstanbul Kart) or pay your bus trip with a debit card at the bus stop. The language of both card loading machines and bus drivers is, of course, Turkish.

When catching a flight or arriving at the airport, buses will take you directly to the door of the departure terminal. But, please, remember to be prepared for traffic jams and allow extra time.

In other words, whether you are arriving or departing, traveling through the Istanbul Airport is easy and comfortable.